Tackling the Global Nutrition Crisis through the Food & Beverage Industry

Gone are the days when corporate responsibility can be defined simply as a company doing no harm. 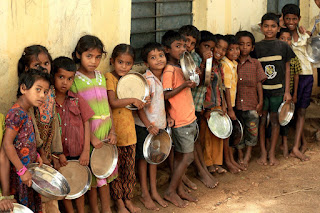 Today, companies must, as Paul Polman preached at Unilever, provide solutions to the world’s greatest challenges not through a separate philanthropic arm but through core business strategy. When they do, they will drive long-term corporate growth and sustainability. Even mainstream investors are starting to agree. BlackRock Investors CEO Larry Fink recently wrote in a letter to CEOs that “Society is increasingly looking to companies, both public and private, to address pressing social and economic issues.”

Nowhere has this shift been more apparent, perhaps, than in the food and beverage industry, where in the past companies focused on reducing their environmental footprint and ensuring the protection of its workers. Today, they are being called to go much further to help solve the world’s global nutrition crisis, which sees one-in-three people either overweight or undernourished.
Helping to push the industry toward greater action is the Access to Nutrition Foundation (ATNF), which publishes the bi-annual Access to Nutrition Index (ATNI) as well as country-specific Spotlight Indexes. First launched in 2013, the Index measures the efforts of the world’s largest food and beverage manufacturers to facilitate improved diets and reduce serious global problems of both obesity and undernutrition.
By assessing and ranking the world’s largest manufacturers on their nutrition-related commitments, practices and performance globally, ATNI aims to encourage companies to increase consumer access to nutritious and affordable foods and beverages through better product formulation, pricing and distribution; and to responsibly exercise their influence on consumer choice and behavior through marketing, labeling and promoting healthy diets and active lifestyles.
To put the Index in context: The 2018 ranking examined 22 companies that generate an estimated $500 billion in annual sales in more than 200 countries, with their products playing a significant role in the diets of millions of us from New York to Nairobi.
ATNF also collaborates with  investors. To date, more than 60 – with US $7 trillion in assets under management – have signed the Access to Nutrition Index Investor Statement.
I spoke with Inge Kauer, Executive Director of the Netherlands-based ATNI, about where she sees progress and why she believes companies that do well on the Index will do well in the marketplace.
MK: Taking the line from Larry Fink’s letter, how are food and beverage companies doing in addressing social and economic issues?
IK: More and more companies are making commitments and pledges to address nutrition and we’re seeing this starting at the Board level. So that is a good thing. The private sector can play a major role in tackling the SDGs [Sustainable Development Goals]. But to tackle the world’s major challenges – all the SDGs – we need the private sector to really accelerate their efforts. It’s good BlackRock is recommending they get involved; investors have an important influence on companies’ management and if they make it a topic of their engagement and  incorporate these issues into their investment decisions, it will accelerate the progress. That said, BlackRock is not yet a signatory…so hopefully they will be soon!
MK: The Foundation has published three global ATN indexes to date. Has there been visible progress?
IK: There has been improvement when you look at the increase in the average scores of companies from 2.5 in 2013 to 3.3 [out of 10] in 2018, but scores are  still relatively low. On an individual company level, we see more improvement. For example, in 2018, nine companies [out of 22] scored 5 or more on the Index, whereas in 2016 there were only 2. FrieslandCampina, a Dutch dairy cooperative, is an example of the type of progress that can be accomplished in a two-year index cycle. They rose four places in the ranking largely thanks to a new strategy, new initiatives to tackle undernutrition, and more responsible marketing commitments. We also see increased efforts by other companies to address undernutrition including by fortifying foods and supporting education programs. And there has been progress on food labeling, with clearer labels and more information on health and nutrition claims.
MK: Are you satisfied with the speed of progress?
IK: No. When you see the nutrition crisis that is happening today, there clearly needs to be a greater sense of urgency. We need a lot more action and acceleration. At the same time, we understand that companies need to do this step by step and can’t change overnight. We hope our Index and scorecards serve as a roadmap for change and helps them take action.
MK: Are companies changing because of the Index or due to business pressures?
IK: Companies understand the need for more diversification and innovation in their product portfolios. They realize the risk of not tackling this challenge because they are confronted with obesity daily and see the impact on consumers and their own employees. They also see growing demand for healthier products as a commercial opportunity.  We see strong examples of this such as with PepsiCo, which has invested in new healthy beverages with lower sugar levels.
MK: Where is there the greatest need for progress?

IK: We need to see more change in product portfolios – increases in the number of healthy products. In 2018, we included for the first time a product profile exercise assessing nutrition quality of products. Only  one-third of products [of Index companies] were classified as healthy. Urgent action is needed to lower salt, sugar, and saturated fat levels and improve the amounts of fruit, vegetables and fiber.

Another important area is to make healthy food more affordable and accessible to vulnerable populations – people who live in food deserts in the U.S. and in rural areas in India. Companies are still struggling to find sustainable solutions. At ATNF, we are researching and working with experts to identify best practices – and failures – we can learn from and share with companies.
MK: Are boards taking a more active role in companies’ response to delivering better nutrition as part of core business strategy?
IK: We see this in some companies. When you look at the Index results, companies that score high marks for governance and oversight practices score high in other areas as well. We see at leading companies that their nutrition strategies are reviewed at the senior board level and are included in management incentive structures. These companies are talking about the Index results at the Board level. But that is not everywhere the case. It is one of the key recommendations we give to companies.
MK: How would you characterize engagement with companies on the Index?
IK: In the beginning, we were fortunate that there was a high level of engagement. We probably benefited due to the existence of previous indexes like the Access to Medicines Index and the Dow Jones Sustainability Index, which leading companies were familiar with already.  We were also well positioned due to our partners, nutrition experts and our funders. This led to a relatively high level of engagement. Over time, companies that were at first not engaging are now reaching out, and we see the level of detail that the major companies provide in their data collection is also increasing. It is impressive how many [companies] are investing in the process and trying to learn from it.
MK: Why create country-specific spotlight indexes in addition to the global Index?
IK: The country-specific spotlights allow us to tailor the Index to local markets and specific country issues. The situation in each country where we have piloted or published local indexes [South Africa, India, Mexico and the United States] is different. They have been very well received by local stakeholders who use them to engage in dialogue on a national level.
MK: Do you see geographic differences in the commitment of companies and the progress they are making?
IK: Not all companies are applying their strategies and programs outside of their own market, they are not being applied globally. We found, for example, in our first U.S. Index that although the U.S. is the largest single market for all the companies we assessed, there was not a lot of disclosure of what companies were doing to improve nutrition for the U.S. customer compared to globally. Our recommendation is to approach consumers globally in a consistent way.

MK: What do you hope the Index helps to achieve by 2030?
IK: I hope that everyone will see the private sector as a key partner. I hope the Index will help speed up progress and that it helps increase dialogue and debate between companies and investors, policy makers and civil society.  I hope, at a certain point, the Index is not needed any more, but is in the heart of the organizations….that preventing malnutrition becomes part of business strategy.
MK: What is one thing you believe the Index could do better?
IK. Contribute to the discussion in more countries, especially where there is high burden of malnutrition.
MK: What is next for the Foundation/Index?
IK: There is a lot going on! We’re going to publish the 2nd India Spotlight later this year, and it will include a few new companies. We’re also developing a self-assessment tool for small and medium-sized enterprises to help them see what they can contribute and measure their own progress. We are in the final stages and will pilot the tool in Nigeria and are looking for a second pilot country as well. Finally, there is interest in regional indexes in Europe and in Africa. We’re currently talking with local partners – NGOs, policy makers and companies to shape a methodology. So, stay tuned!
MK: What is most rewarding about your work on the Index?
IK: I am passionate about tackling malnutrition. In my life, I have always worked and advised companies on what they can do to solve social problems. I see an enormous potential for the private sector to do more in this area. To see it more and more on the agenda of companies and that there is more focus on  the potential role of the private sector in tackling malnutrition-- that is driving me to do this job.
Stay tuned for a discussion in a future blog with a leader on the ATNI and their efforts to address the global nutrition crisis.
Posted by Maggie Kohn at 9:13 AM