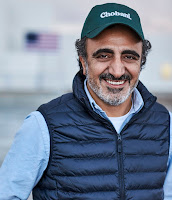 Move over Bradley Cooper. I have a new crush. His name is Hamdi Ulukaya.  While he may not have your dreamy blue eyes, he does have a refreshing, intoxicating vision of what today’s CEO should be like that will leave you yearning for more.

If you are not familiar with Hamdi Ulukaya, he is the son of a dairy farmer from rural Turkey who came to the U.S. without speaking English and with a mere $3,000 in his pocket. In 2005, he saw a for-sale sign for an old yogurt factory in upstate New York that had just laid off its workers. When he ventured inside, something stirred in his soul and he took a risk. Today, that yogurt factory is one of two producing Chobani yogurt, the No. 1-selling strained yogurt brand in the U.S.


It’s not just that I really like yogurt, or that Hamdi  has really great hair, it’s that he is an example of how a company can succeed by believing in human dignity, and by putting employees and communities first.
The examples below speak for themselves.
In 2015, feeling a personal responsibility to help address the refugee crisis, he decided to hire local African and South-East Asian refugees living near the Chobani factory in upstate New York to “give them a chance to start a new life.”
During a recent TED Talk, he explained this decision as corporate responsibility. When people pointed out that the refugees didn’t speak English, he got translators. When they explained that they didn’t have transportation, he got buses. Today, 30 percent of his workforce in rural New York are immigrants and refugees.  “From the minute refugees get a job, they stop being refugees and start planning for their futures.”
He went further than his factory walls. At the 2015 World Economic Forum in Davos, he launched the Tent Partnership for Refugees along with three other corporate CEOs. Their goal: Mobilize the private sector to improve the lives and livelihoods of the more than 25 million men, women and children forcibly displaced from their home counties. Tent has grown from the original four companies to more than 100 and today supports refugees in 34 countries. And it’s not just philanthropic. Hamdi and  his partners believe passionately that the private sector, more so than government, is uniquely positioned to address the refugee crisis by mobilizing the networks, resources, innovation and entrepreneurial spirit of the business community. I couldn’t agree more.
Within his own company Hamdi has taken more bold steps. In 2016, he introduced Chobani Shares, an initiative to give every full-time member of the company the opportunity to share in the growth of Chobani over time. And in 2017, he implemented a new paid parental leave policy, offering 100 percent paid parental leave for six weeks for all full-time hourly and salaried employees – one of the most generous leave policies in the country.
When Chobani needed to build a second factory to meet growing demand, Hamdi didn’t turn to the state that offered the largest tax incentive. He turned to a struggling, rural community in Idaho. He was told he wouldn’t be able to find the skilled workers he needed so he partnered with the local community college to train them together. Today the community is thriving, and the plant is one of the largest yogurt plants in the world.
Earlier this year, when he heard that students with outstanding lunch fees at Warwick Public Schools in Rhode Island would be limited to eating “sun butter and jelly” sandwiches, Hamdi announced that Chobani would donate nearly $50,000 to pay off the debts.
For me, Hamdi cinched the role of leading man in a starring role in an April TED Talk where he  called for a new “anti-CEO playbook.” Here is an excerpt from that talk, which I am sure you will find, like I did, as tantalizing to listen to on YouTube as Bradley Cooper is to watch in A Star is Born.
“Corporate America [today] says it [business] is about profits…the current CEO playbook says it is about shareholders. It is time to admit that the playbook that guided business and CEOs for the last 40 years is broken….It tells you everything about business except how to be a noble leader. We need a new playbook that sees people again. That sees above and beyond profits.”
He went on to describe the four pillars of the new anti-CEO playbook:
1.       Gratitude. Instead of maximizing profit for shareholders, “business should take care of their employees first.”
2.       Community. Today, businesses ask, ‘What kind of tax incentives can you give me?’ “Business should go to the struggling communities and ask, ‘How can I help you?’”
3.       Responsibility. Business today believe they should stay out of politics, but “business, as citizens, must take a side on issues like immigration, climate change, gun violence, race, income inequality... Business, not government, is in best position to make a change in today’s world.”
4.       Accountability. Today, CEOs report to the corporate board, but “I think CEOs should report to the consumer… Consumers are in power; that is the reason that business exist.”

He ended his talk remembering the treasure he found in the factory in upstate New York and what he learned from the people who had been laid off about the dignity of work and of the human spirit. “We need to unleash that [spirit] all across the world…There are people and places all around the world left out and left behind, but their spirit is still strong…they just want another chance. This is the difference between return on investment and return on kindness…this is the difference between profit and true wealth.”
If I could have just one wish, it would not be to walk down the red carpet with Bradley Cooper (but, in case he’s reading, that would be nice). My wish would be for all CEOs to take a page or two out of Hamdi’s “anti-CEO playbook” and to see what is possible when they bring the best of humanity into the boardroom.
Posted by Maggie Kohn at 11:15 PM